The names of some of South Australia’s greatest football names – including Cahill, Kerley, Davies, Ricciuto and Wanganeen – will take pride of place at the Adelaide Oval from 2014.

They will join those already to be honoured with statues at the ground – Malcolm Blight, Russell Ebert, Ken Farmer and Barrie Robran – with their names to feature prominently throughout the stadium. 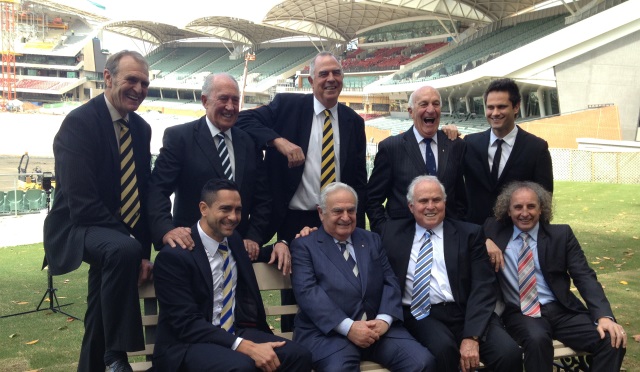 The list of greats and their location within the Oval is as follows:

It is hoped that South Adelaide legend and Australian Football Hall of Fame inductee Dan Moriarty will also be recognised at the Adelaide Oval with a display to honour his feat of being the only player to win three consecutive Magarey Medals.

South Australian Football Commission Chairman John Olsen said the process of choosing the legends to be honoured had been long and exhaustive.

“Football in South Australia has had so many great players over our 136-year history that it was always going to be an incredibly difficult process to narrow it down to a select few,” Mr Olsen said.

“We put together a group which consulted with the South Australian Football Hall of Fame committee and the Commissioners with input from the SANFL league clubs and, over the course of many months, we have arrived at what we believe is an honour roll of this State’s football history.”

Mr Olsen said the way remained open for other greats to be honoured in the future.

“With Adelaide Oval becoming the new home of football in South Australia from next year, we will always continue to look at opportunities when and where they come up.”